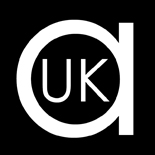 Arriving at the hub of freelance creative director Miss Cakehead’s headquarters on an average Thursday evening in August, it soon became apparent that this was no ordinary gathering of creative minds. I had been invited to witness the photoshoot for the PR campaign surrounding the Resident Evil 6 video game release on 6th October 2012.

Naturally the life sized latex naked man on the floor of the room with head covered in cling film was the first thing I noticed (and that everyone was ignoring it and stepping over it like it wasn’t there).
Promptly I was introduced to ‘the gang’ by Emma (MissC) (bitten and dragged by a zombie); consisting of Carla (throat cut), Dan from ‘Full Fat PR'(burns), Adam from ‘Capcom’ (gunshot in the head), Jade Rand (leg torn off), Zoe (the mortician and phlebotomist) and of course the photographer documenting it all, Nathan Pask.
Looking around the walls above the make up station (and the largest collection of fake blood I’m ever likely to see), were actual photographs of bullet wounds, burns & scrapes supplied by Carla the pathologist and ex-mortician so the amazing make up artists (Sam Bull & Emma Watts) could work their magic in making the afflictions completely accurate and realistic.
The iconic Resident Evil trademarks were seamlessly incorporated into the concept such as the IVY university sweater and the ‘6’ symbol hidden in the wounds.
There’s no doubting these guys’ devotion to the project; even favourite clothes were destroyed to look ripped or burned.
After 3 hrs of make-up (and pizza while discussing autopsies), we were off onto the streets on London in a convoy of cars. I can only liken the experience that followed as a ‘flash mob zombie killing aftermath’. No sooner has we piled out of the cars at each destination (various gaming and press offices in London) and the victim arranged in the correct position according to their attack, than the make up girls came in. The fake blood was then poured, dabbed, wiped, painted and even spat (for the gunshot) to give the effect that even we had to look twice to check the model was ok. Nathan then came into his own, we all stood back and watched (occasionally reassuring passers by who were shocked by what they saw). After Nathan had worked his magic, the cleaners swept in to remove every trace of blood from the pavement as if we were never there, and we all bundled back into the cars and onto the next location. A well oiled operation.
It was a unique experience watching such a professional team getting the job done with such passion and humour (believe me, there were LOTS of laughs along the way!). The next day at work seemed pretty boring in comparison.
The ‘crime scene’ photographs would be sent together with a mortuary report to selected press. I wonder what the recipients thought!
www.misscakehead.com 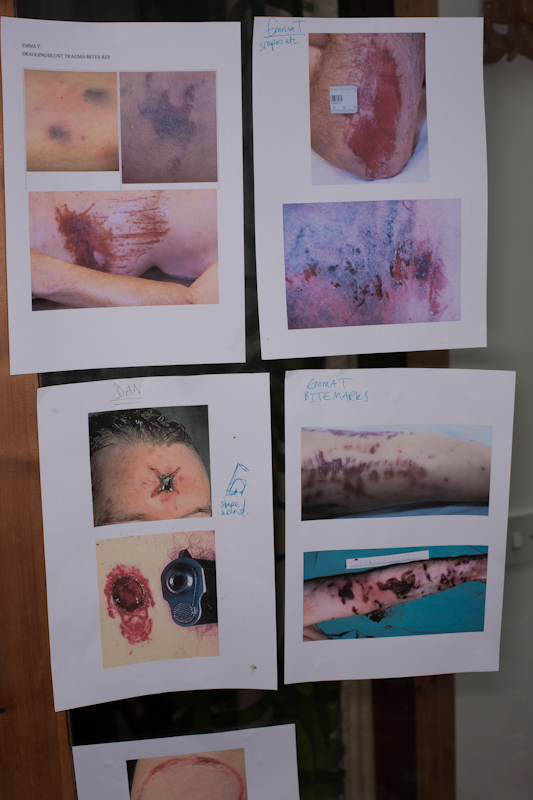 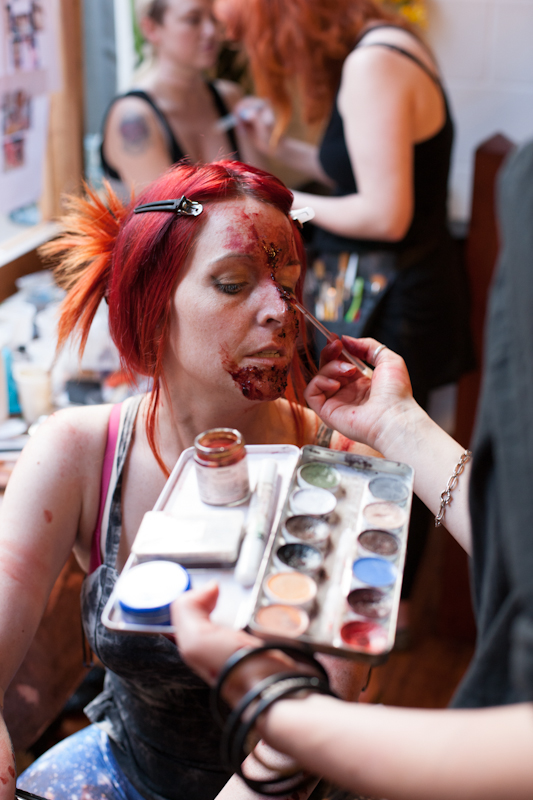 Emma having her ‘drag wounds’ applied 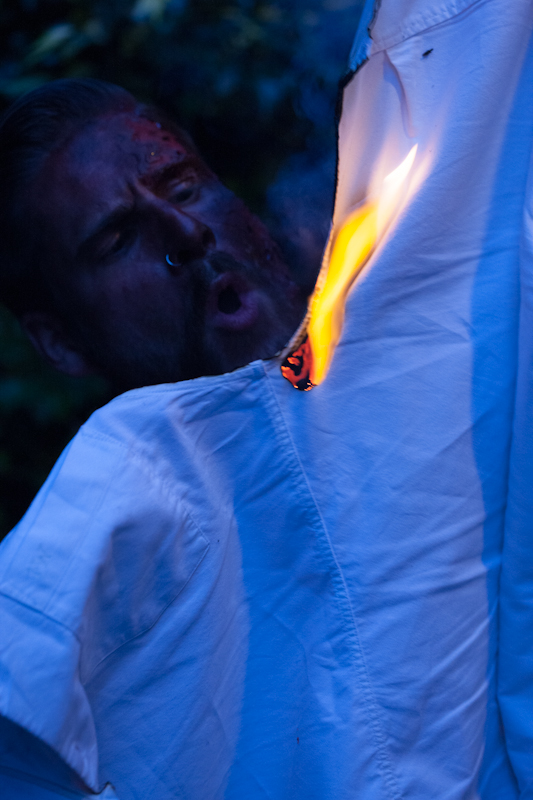 Dan burning the shirt off his back 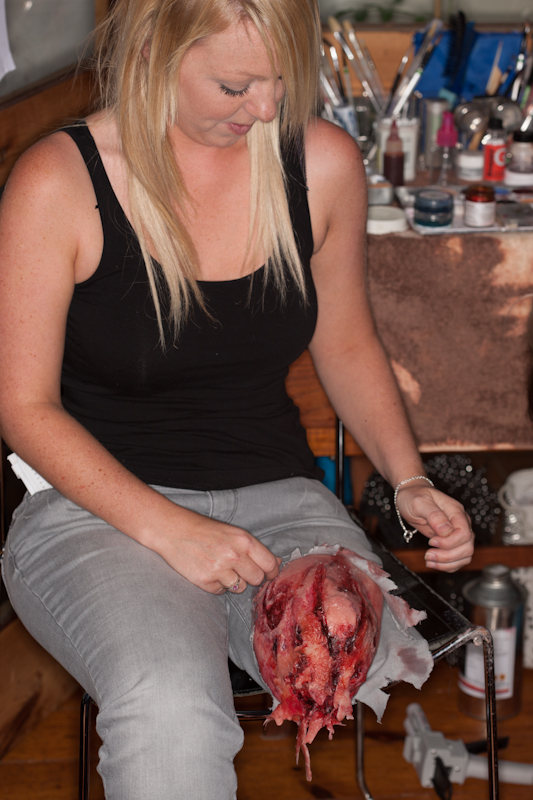 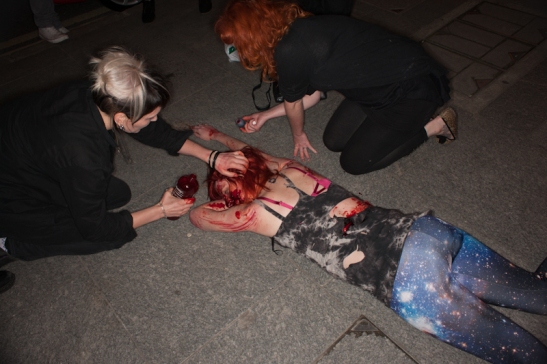 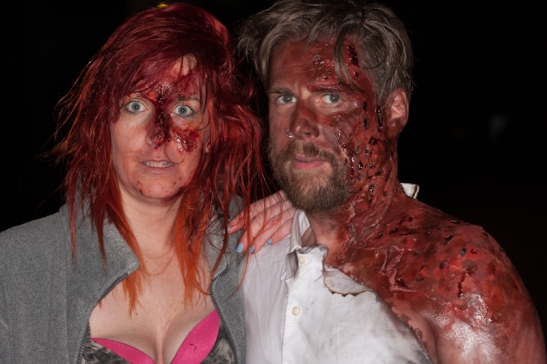 Emma and Dan turning heads on the streets of London 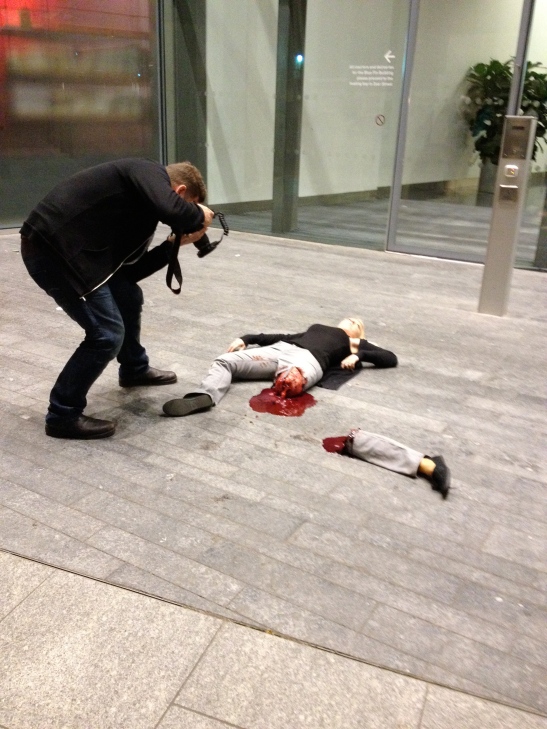 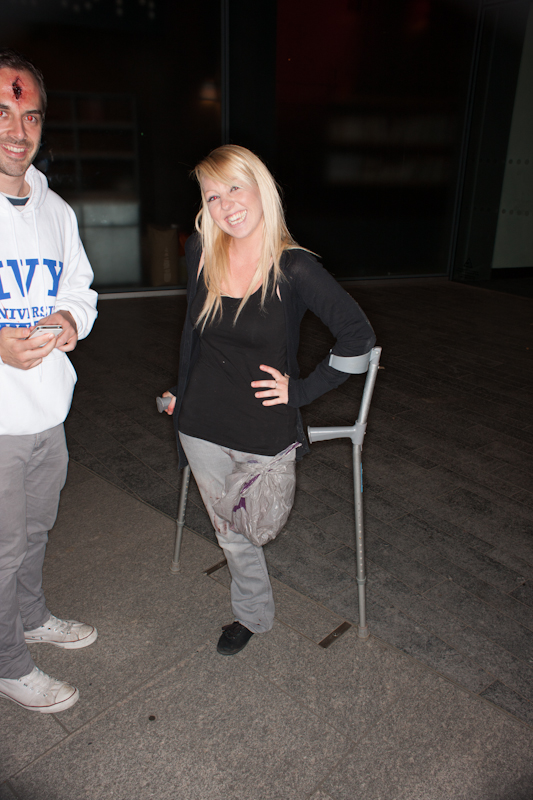 Adam and Jade hanging out on the shoot 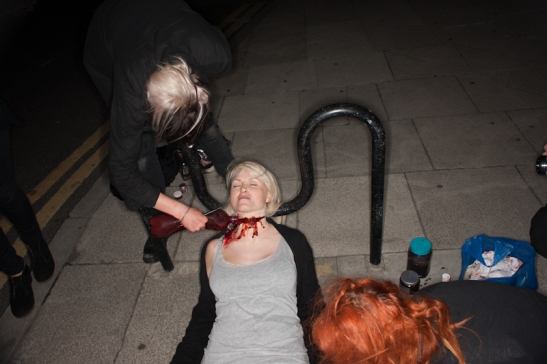 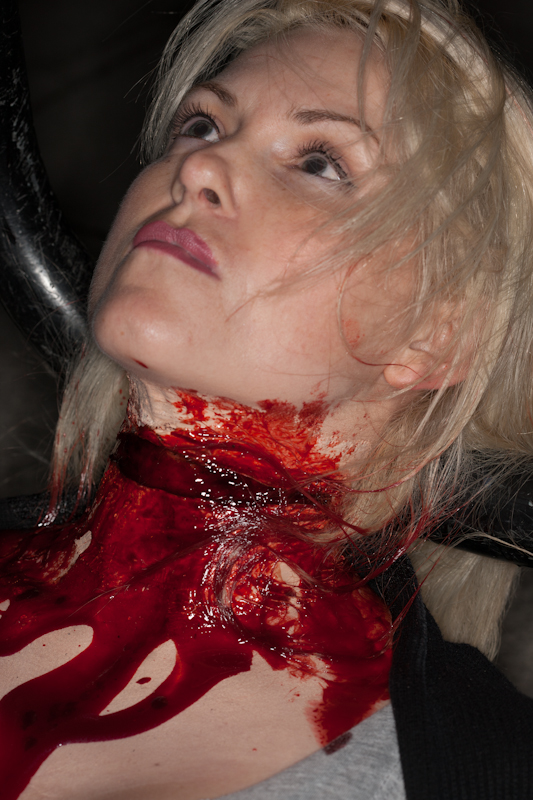 One comment on “Resident Evil 6 Release Photoshoot: Behind the scenes”